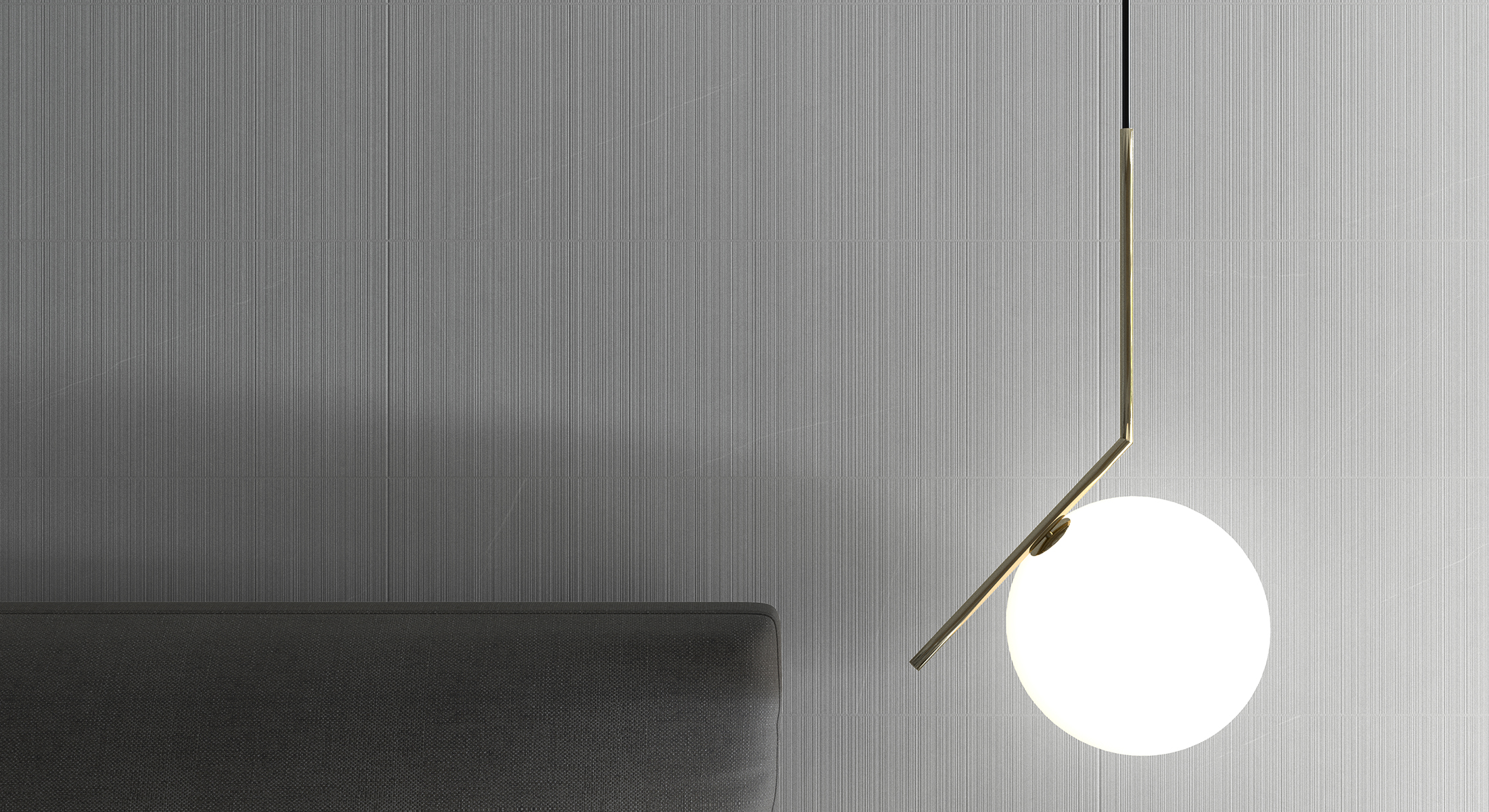 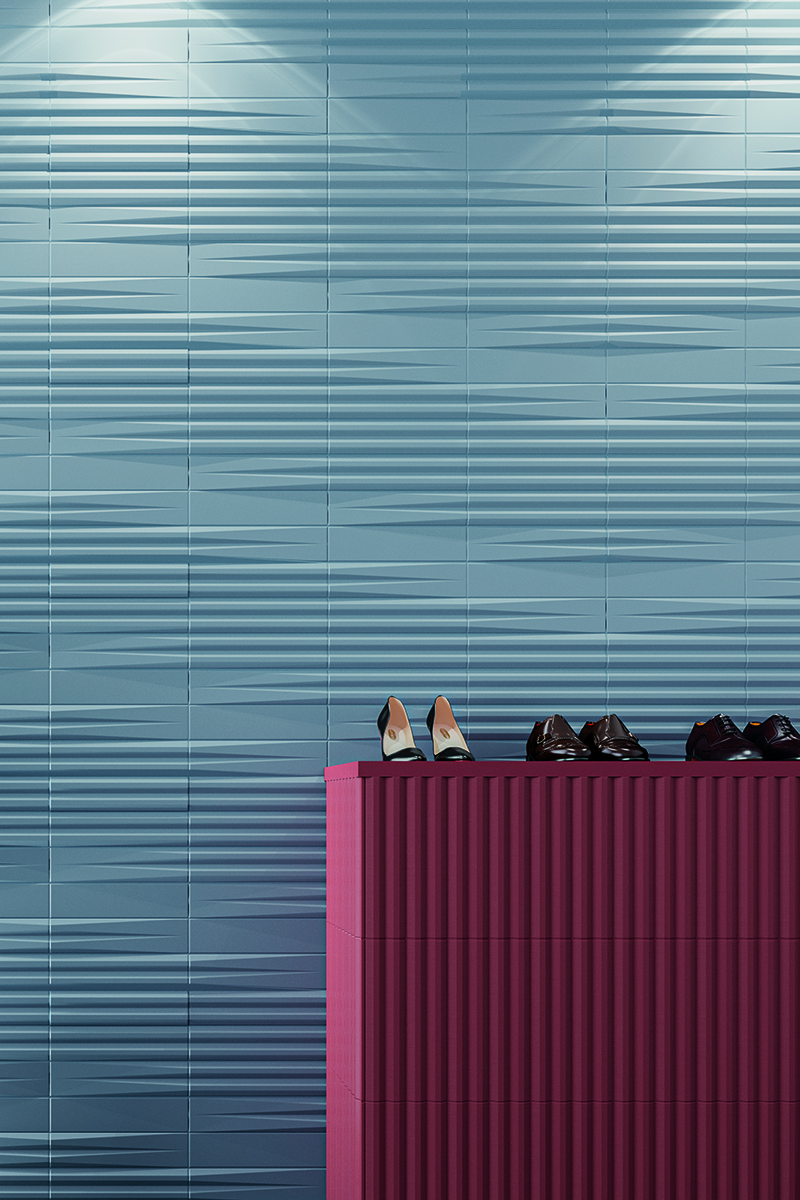 Stripes is a ceramic tile range with three distinct surface options: Stripes, Transition & Liso XL. The Transition pieces are used to create a seamless segue between the Stripes and Liso XL surfaces. Tiles can be laid vertically or horizontally, creating feature walls delineated with bands of light and shadows. 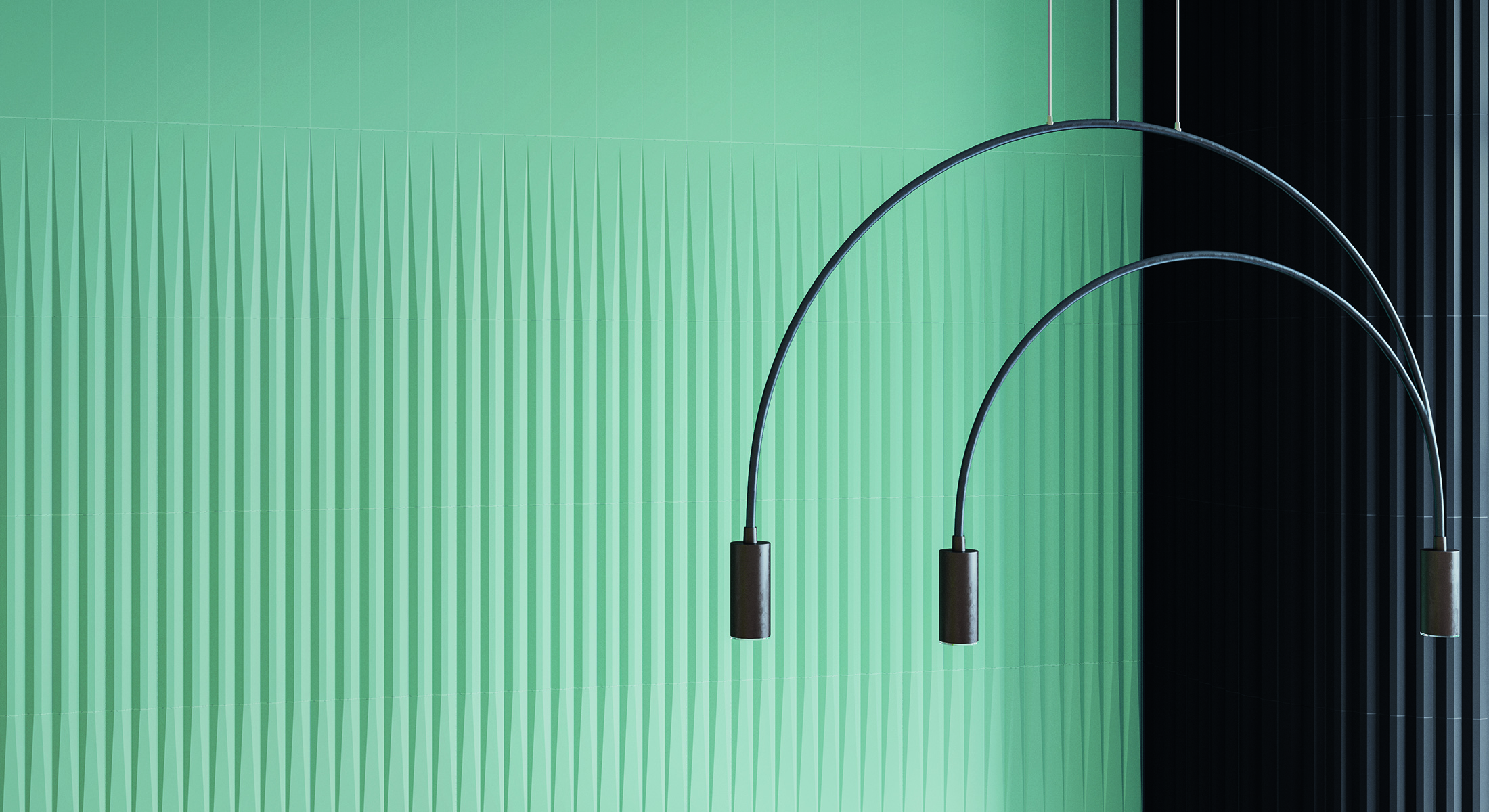 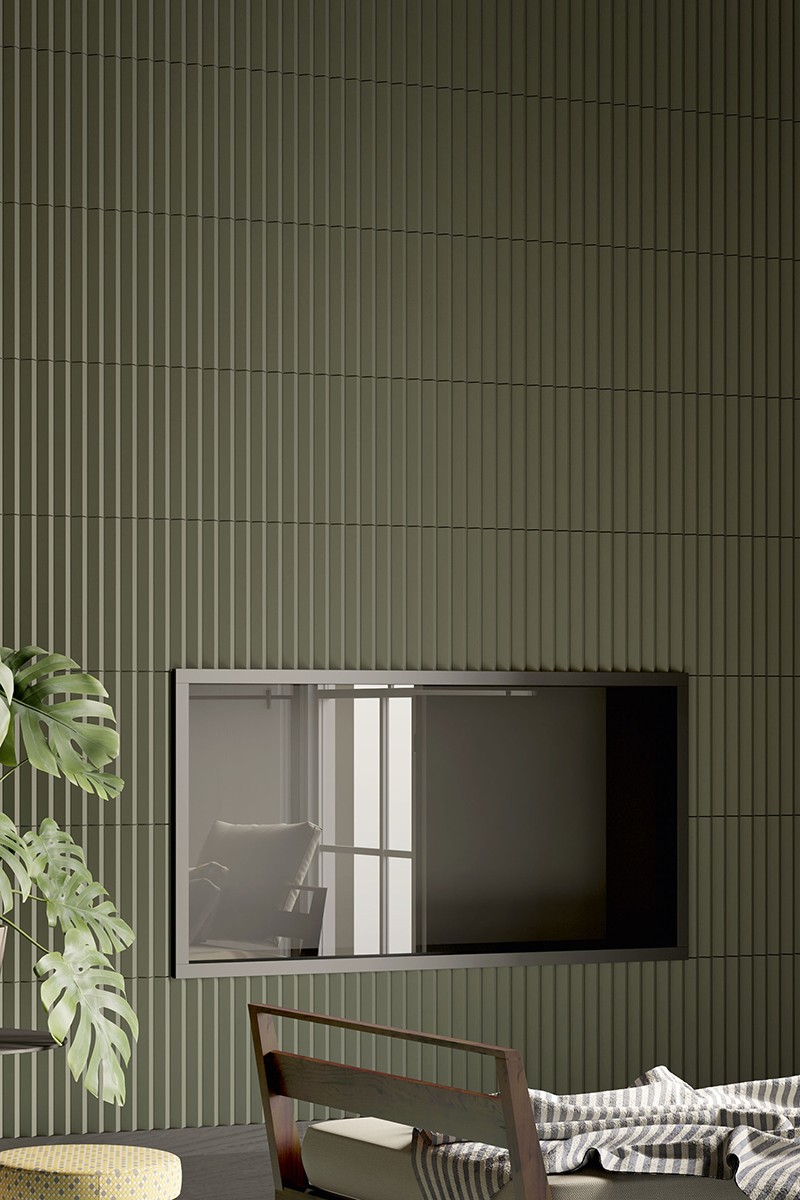 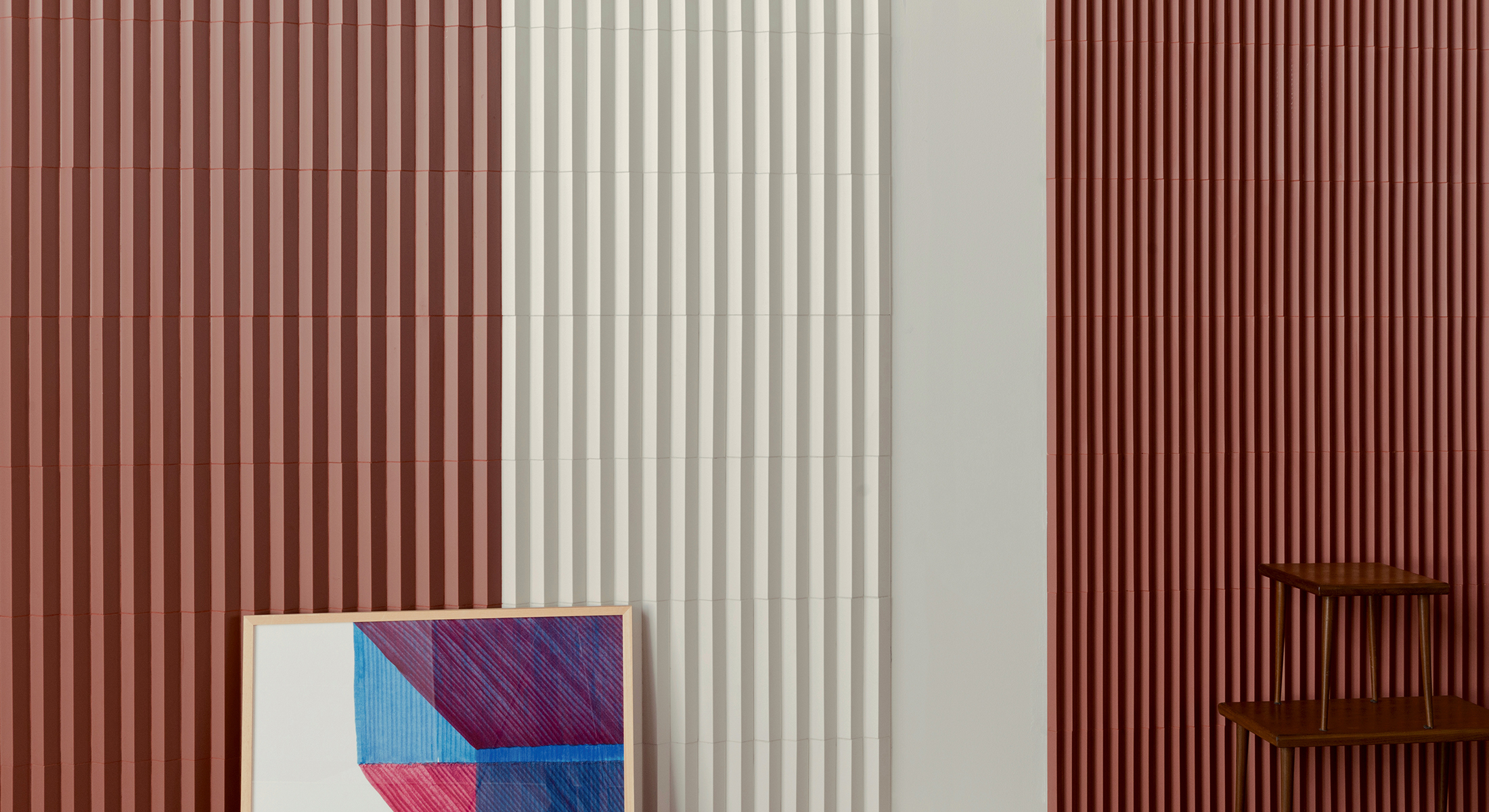 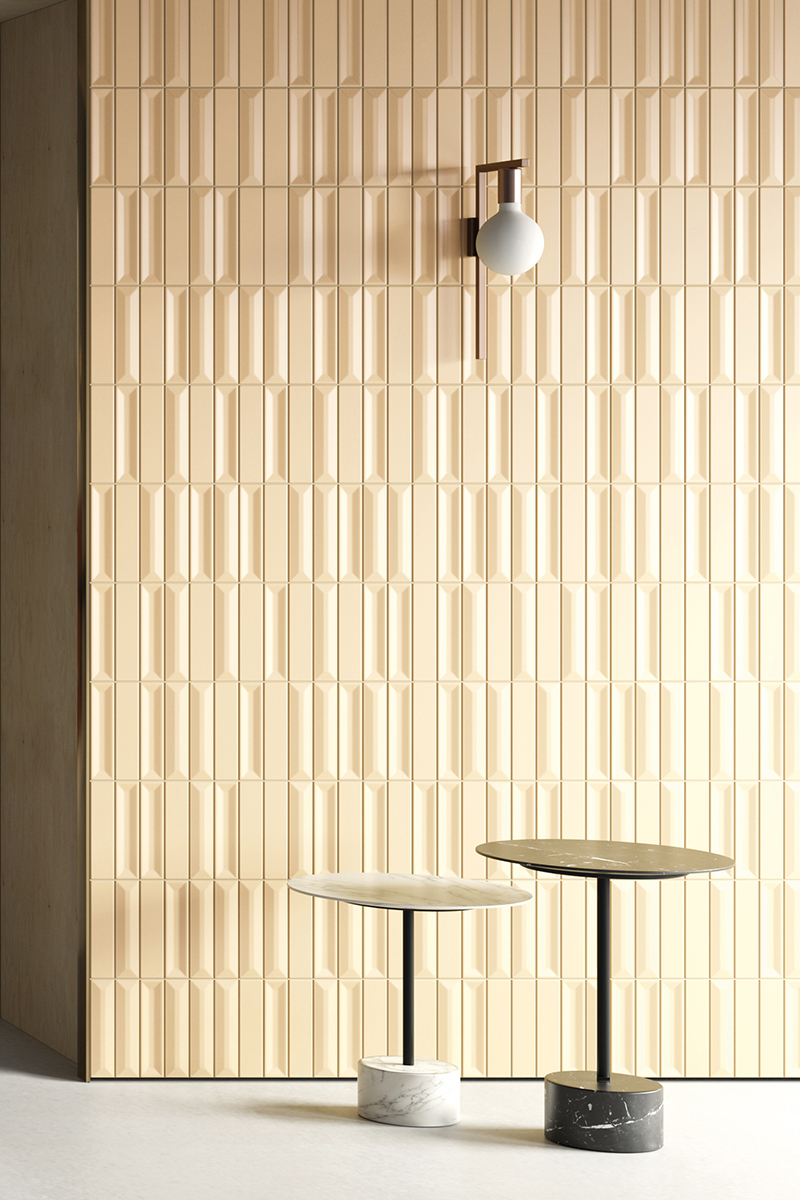 Flauti is a striking and architectural ceramic range recommended use on walls only. Made up of random mesh-mounted pieces, both 3D and flat, it gives a sense of movement on walls as it reflects the light. Flauti is suitable for both indoor cladding and outdoor facades. 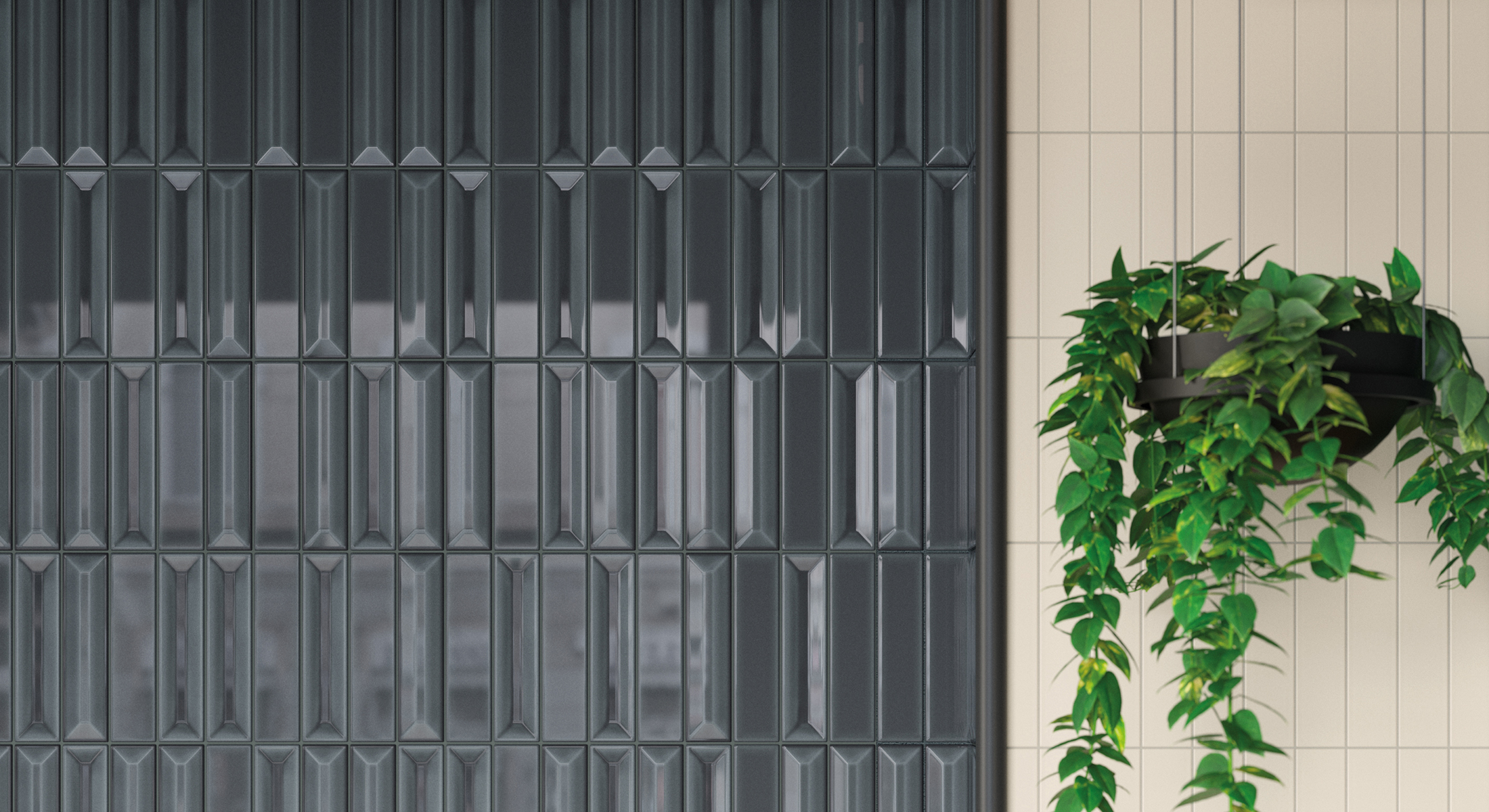 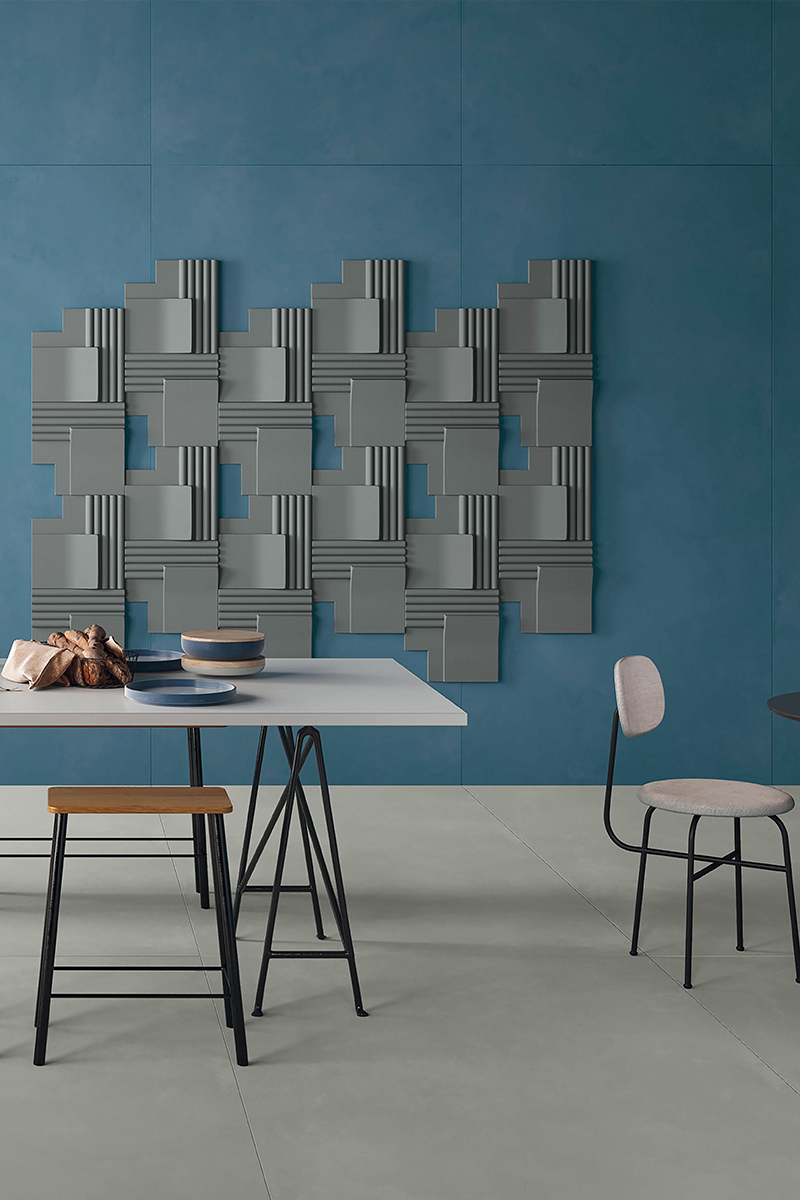 Rilievi is the combination of two basic elements: a large slab and a three-dimensional patterned décor placed on top of it. These two elements can be combined in different ways depending on their numerical multiplication, the layout of the slabs and the shapes built up by placing the relief tiles one after the other. 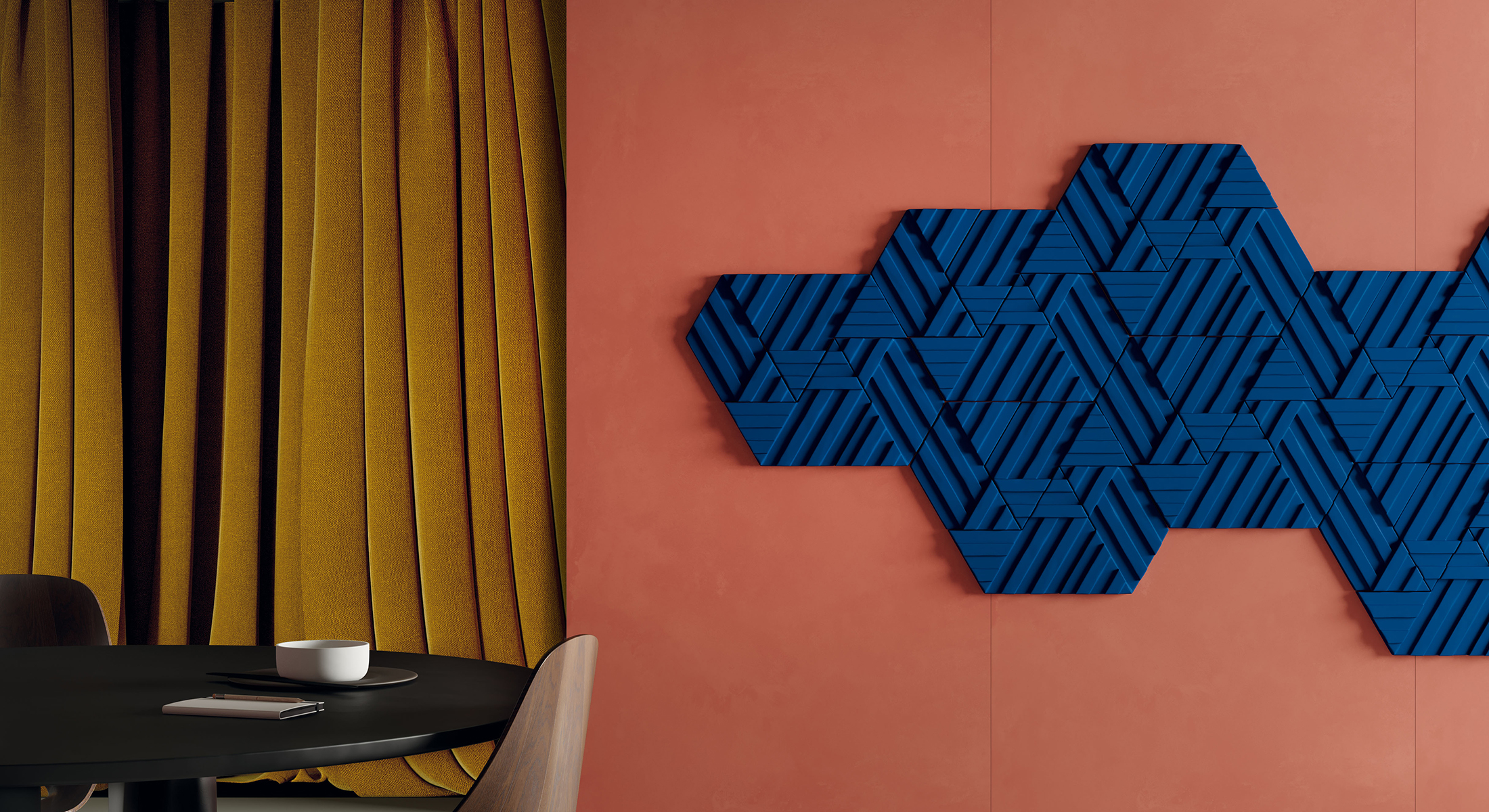 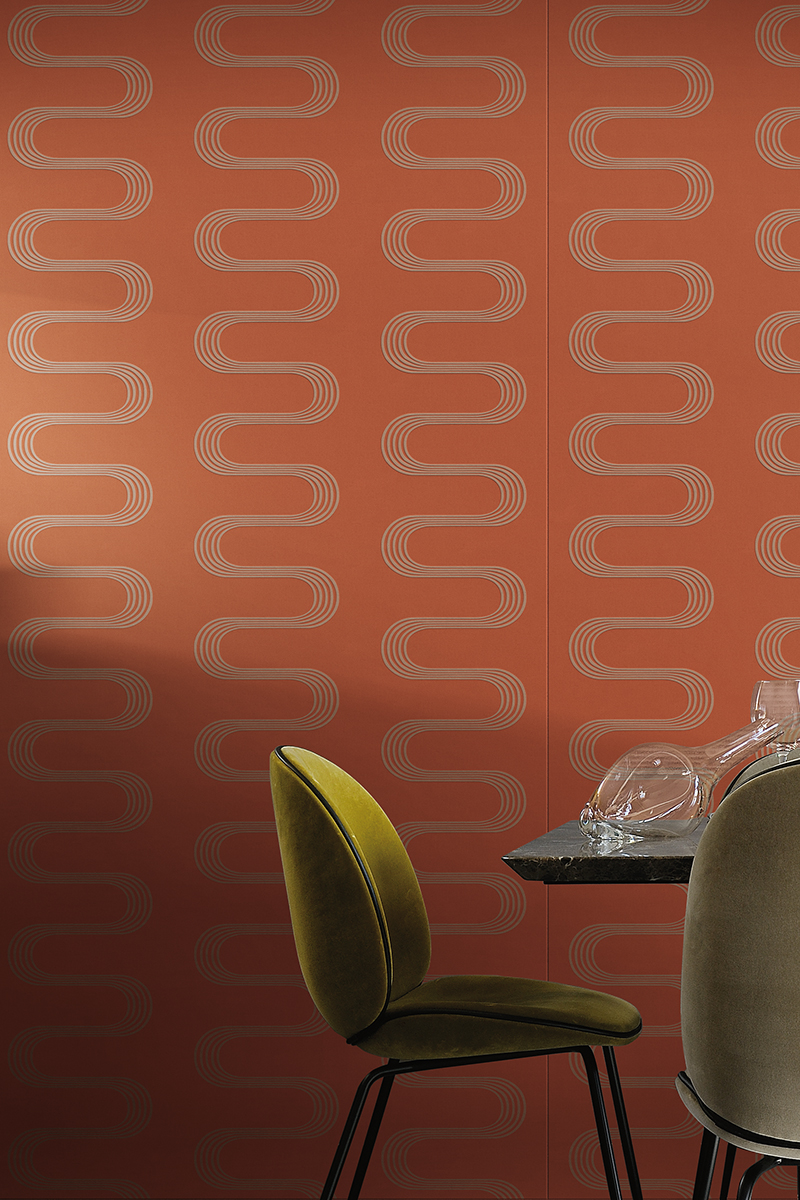 I Filati Magnum evokes the sense of craftsmanship of the centuries-old art of silk with large porcelain slabs that present themselves as innovative fabrics. The surfaces are inspired by Rubelli’s signature fabrics that are born from the contemporary reworking of decorative motifs from the noble Venetian heritage of weaving. 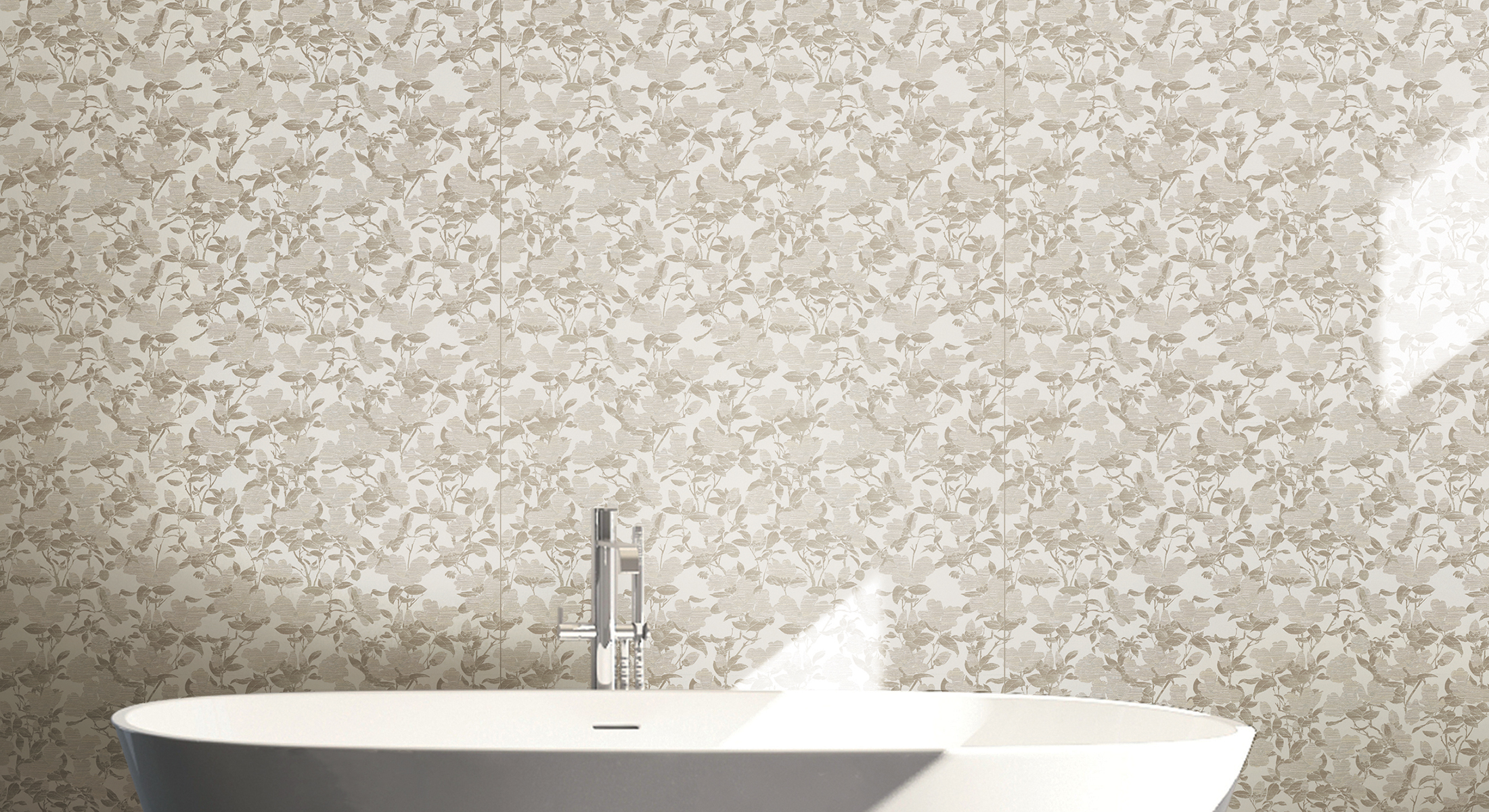 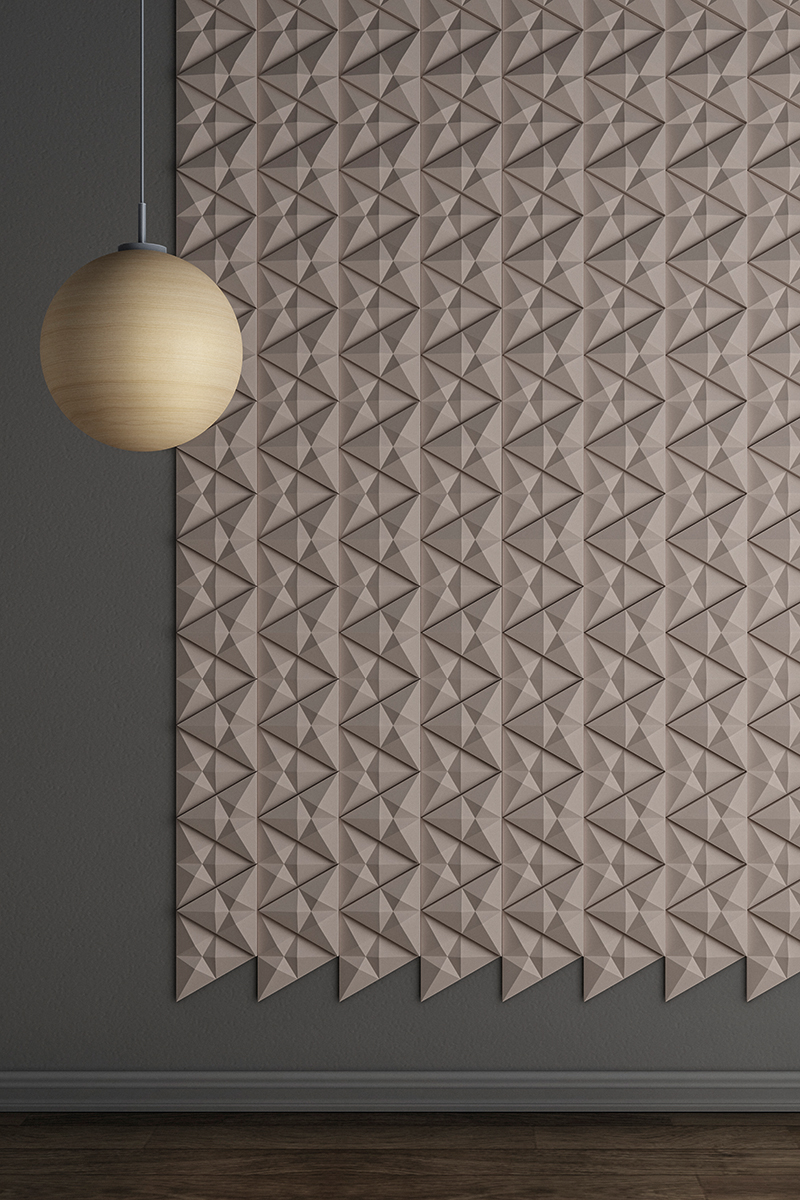 Kaza Tre’s magnetic visual appeal is the result of precisely rendered angular contours that harness the beauty of symmetry, as well as the dynamic interplay of depth, light and shadow, and the energetic movement of geometric flow. This range allows one to create endless pattern combinations from the most simple, minimalist applications to the most elaborate kaleidoscopic masterpieces. The design concept is an invitation to imagine, play and create. Each tile in the series works as well independently as it does in multi-tile combinations and maintains its signature visual appeal even in randomized configurations. The Kaza Tre range is a statement in modern tile design as well as a structured medium, which allows for limitless interpretations of its core aesthetic. Designed by Ilan Garibi, Kaza Quadilic is a progression from a basic paper tessellation of a molecule. Unlike most tessellations, it is folded very slightly, without any overlapping. Its shape, being as far removed as possible from the classic rectangle, creates a mesmerizing vision of shifting squares, giving rise to its name. As an origami artist and designer, Ilan loves to find applications that exceed the potential of paper. This range is created by four diagonal lines that emerge from the central square. It could not be any simpler, and yet the effect is quite the opposite. 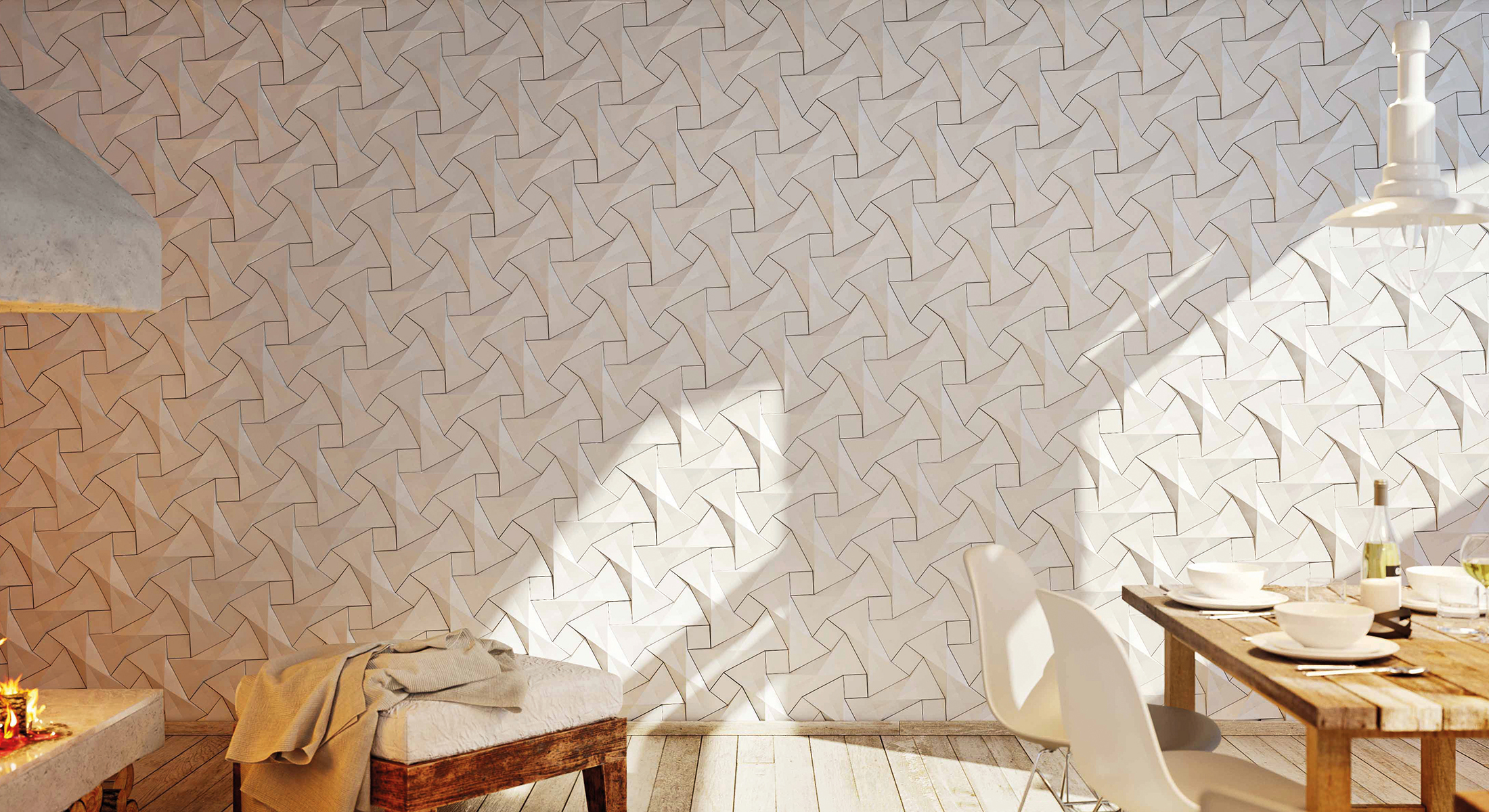 Show me more inspiring feature walls
Back to index